On August 23, Vice President Chen Chien-jen paid a visit to Changhua Christian Hospital (CCH) Dementia Daycare Center – Estelle Wilkerson Institute. After a brief tour, Vice President Chen expressed that he was deeply impressed by the innovative and tailor-made service given to each dementia elder patient and praised such daycare service should be promoted to a nationwide level.

The Estelle Wilkerson Institute, a dementia care center supported by CCH’s A Skin-Graft With Love Foundation to cater for the dementia elder people, is named after the US missionary Mrs Estelle Wilkerson serving in Taiwan from 1953 to 1980.

To comply with the government’s Long Term Care 2.0 Policy, a perspective social welfare policy to solve Taiwan’s aging problem, CCH’s A Skin-Graft With Love Foundation started to cooperate with Changhua County Government from the end of 2016 to set up a paradigmatic care center for community level in Changhua City. And The Estelle Wilkerson Institute is the very flagship daycare center to creatively cater the elder people with local elements and tailor-made services. 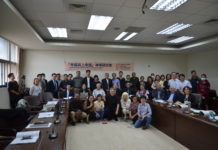 A Community-Level Service Center Of Long Term Care Is Ready To...