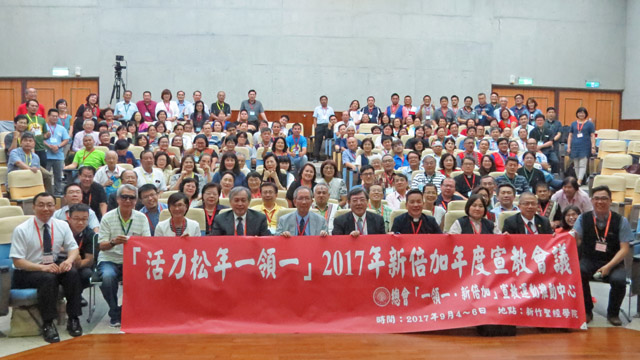 From September 4 to 6, an annual missionary assembly, entitled as “Dynamic Senior Citizens For One-Leads-One Mission” and organized by PCT Promotion Center of One-Leads-One New Doubling Movement, was held at Presbyterian Bible College in Hsinchu City. Over 150 representatives from 26 PCT presbyteries and district assemblies took part into this significant meeting to give their concerns for the spiritual and medicare demands of the aged people.

Ms Chen Su-chun, Vice Director of Social and Family Affairs Administration of Ministry of Health and Welfare and an expert of senior citizen’s welfare policy, was specially invited to address the issue how local churches could cooperate with the government to run a C-level long-term care station within the community. As PCT possessed a network of 1260 local church members across the island, “this is a very powerful resource for the government’s long-term care policy”, Ms Chen remarked.

Rev Tsai Nan-hsin, Associate General Secretary of PCT, expressed that PCT’s ministry of serving senior citizens was not only a special gift but also an advantage. Following the government’s version 2.0 long-term care policy, implemented from 2016, PCT General Assembly would include this social welfare policy for senior citizens as one of the major tasks to be achieved in One-Leads-One New Doubling Movement, Rev Tsai said.

Rev Lyim Hong-tiong, General Secretary of PCT, urged all PCT local churches to do a critical review of the One-Leads-One New Doubling Movement when this evangelical mission had entered its 7th anniversary and only three years left to reach the doubling goal set in 2020. Rev Lyim encouraged all PCT presbyeries, seminaries, local congregations and the affiliated institutes to cooperated together as PCT’s forebears have made it half a century ago.