PCT and PCNZ get further acquainted and discuss ministry possibilities

Vogel, who spoke fluent Mandarin, had previously visited Taiwan and worked in Hakka mission 20 years ago. He reminded his hosts that both PCNZ and PCT are members of Church World Mission (CWM) and added that he hoped this CWM connection would help both churches take their partnership to a deeper level.

He also said there were many Chinese, Singaporean, Malaysian, and Taiwanese immigrants and foreign students in New Zealand and PCNZ was looking for Taiwanese pastors and Taiwanese Christians to help it reach out to these people. He hoped that as PCT and PCNZ got to know each other more, an outreach ministry for these people would emerge.

Chiohh and Hu replied that they also hoped this proposal would be considered seriously and studied closely and culminate in an outreach ministry spearheaded by both churches. 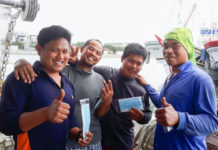