An expert team of eight medical staff from MacKay Memorial Hospital, led by a senior attending physician Dr Young Jun-ren of Pediatric Gastroenterology Division, was sent to Kiribati in the end September for an annual medical mission initiated from 2006. During their five days’ medical ministry at Kiribati, 200 more local patients were flooded into the site for diagnosis or treatment on day one.

Dr Hsu Ray-hsien, a senior attending physician of Otorhinolaryngology Division, remarks that among his 86 patients in day one’s ministry over 90% of them are diagnosed with chronic tympanitis. The major cause of such chronic tympanitis is highly related to the hygienic habits of Kiribati people, whose eardrums are easily cracked or got infected by virus during their bath in the lagoon or by the river, according to Dr Hsu.

Due to lack of medical resources and medicines, like insufficient supply of antibiotics, many patients had contracted chronic tympanitis since their early childhood and never got cured, Dr Hsu says, adding that a sanitary education about the importance of ear plug before taking a bath in the river or lagoon is a must for the Kiribati people in the future. 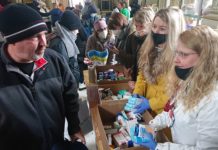