An Around-Taiwan Hiking Calls To Care For Earthquake And Tsunami Victims In Sulawesi Island, Indonesia

After a 7.5 magnitude earthquake happened near Sulawesi island on September 28, and subsequently a tsunami was therefore caused to flood into the cities of both Palu and Donggala, it was estimated that 2.4 million people became homeless and their possessions and daily lives were almost lost or ruined within this devastating catastrophe.

Facing this horrendous natural disaster happened to our Indonesian brothers and sisters, Brother Kang Yuin-chon, a 24-tear-old church youth from Koh-Liao Presbyterian Church, decided to raise money for these Sulawesi victims and the injured via an around-Taiwan hiking reminding the public to donate or reach out for charity’s sake.

On November 1, Brother Kang started his around-Taiwan hiking from Gang-Shan Township of Kaohsiung City and went southbound with a speed of 30 kilometers per day. Expecting to finish his charity hiking within one month, Mr Kang plans to go back to Gang-Shan Township on December 2.

In the interview, Brother Kang remarked that an around-Taiwan hiking had been always his dream from the childhood. Now, seeing so many Indonesian people become homeless or suffered in such a big trauma, he decided to initiate his pilgrimage plan around the island with a call of charity to the public. “After all, God teaches us ‘Look not every man on his own things, but every man also on the things of others’,” Brother Kang stressed. 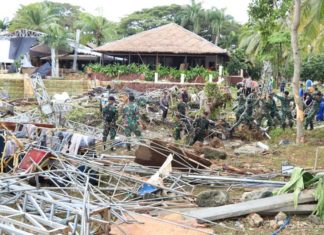