An especially heart-warming and ingenious engagement ceremony was held at Madou Sinlau Hospital on March 5. This ceremony was held to encourage and fulfill the wish of a terminally ill patient known as “Auntie Lin” who has cancer. The ceremony was held in Lin’s hospital room, which was nicely decorated for the occasion. During the ceremony, Lin’s second son, Bo-sheng, and her future daughter-in-law, Ting-feng, exchanged engagement rings and made a commitment to each other.

Auntie Lin discovered that she had a tumor in her breast about 2 years ago. After undergoing surgery to remove the tumor, followed by chemotherapy and radiation therapy, her condition stabilized. However, the cancer reappeared in September 2012 and she was readmitted to the hospital in February of this year and placed in the Palliative Care Ward. After getting to know Auntie Lin better, the staff at the ward discovered that her greatest desire and unfulfilled dream was to see her son settle down and get married. Because her son already had a steady girlfriend and Auntie Lin’s health was quickly deteriorating, the Lin family and the ward’s staff discussed this situation and decided to put together a heart-warming engagement ceremony.

According to the charge nurse at Madou Sinlau Hospital, Bo-sheng and Ting-feng have been dating for many years. To reassure his ailing mother, Bo-sheng promised her during this ceremony that he would take good care of his bride-to-be. The couple then exchanged rings in front of their friends, relatives, pastor and ward staff. Auntie Lin also spoke and reminded her son to honor his future in-laws and to take care of himself. The ceremony concluded with hugs and words of thanksgiving and love.

Since breast cancer has been ranked #1 in the top-10 list of cancers in Taiwan for the past 13 years, Sinlau Hospital is reminding women to visit a hospital and consult a physician as soon as they detect a lump in their breasts so that cancer can be diagnosed and treated early. 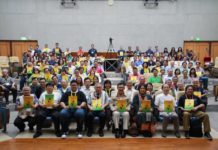 “Taiwan is Taiwan” Touted in PCT’s Campaign for TEF Consensus 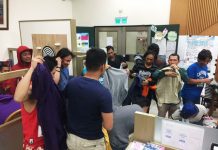 Heavy Coat, Jacket And Trousers Needed For Migrant Sailor And Fishermen In Taiwan