A Political Earthquake After Taiwan’s November Election And Referendum

The Taiwanese people spoke after a nine-in-one election, which means nine public office campaigned to be elected on the same day, and 10 referendum votes were held on November 24.

Though a local election, the election result is a big political earthquake for Taiwan society: KMT(Kuo-Ming-Tang, the Chinese Nationalist Party playing the opposition party) got a landslide victory winning 15 seats of mayor/magistrate, while the ruling party DPP(Democratic Progressive Party) only kept 6 seats and the independent candidate(Dr Ko Wen-tze)survived his second term as Taipei City Mayor with a tiny margin.

The results of referendum votes showed three KMT proposals(referring to anti-air-pollution, anti-Shenaou-power-plant and anti-nuclear-zone-food), three anti-LGBT proposals and one pro-nuclear proposal were all passed the minimum threshold as a guidance for future policy, especially the pro-nuclear proposal forced DPP immediately to drop her “No-Nuke Home” policy at 2025 within days after election.

Rev Hsuei Bo-Tsan, Moderator of PCT General Assembly, gave a straight comment that though it is a very common thing to win or lose in the democratic election, leaders of the ruling party should do a critical policy review themselves when they are failed in this kind of mid-term election. He also encouraged Taiwan society, “Anyway, we should stand by Taiwan to keep our faith in the universal values of democracy and freedom. We shall keep going to make Taiwan a normal country and working hard more to build Taiwan a new and independent country!” 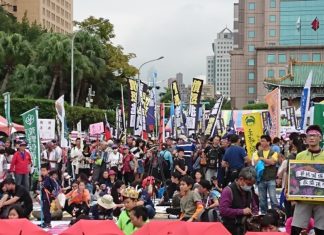