President Tsai: We Must Use Our Morals and Courage To Stand With Those Who Suffer Religious Oppression

In her formal speech to opening ceremony of the Taiwan International Religious Freedom Forum(abbreviated as TIRFF) held at the Presbyterian Bible College in Hsinchu City from May 29 to June 1, 2019, President Tsai Ing-wen encouraged the audience “We must use our morals and courage to stand with those who suffer religious oppression.”

This call to China government for religious freedom naturally follows from her comment:”Recent reports by international media about conditions in China have also brought troubling news. Christian churches face suppression. Tibetan Buddhists have been placed under strict control. And Uighur Muslims are being sent to re-education camps as we speak. The international community must show its concern and speak out about these developments”.

She affirms that Taiwan’s religious freedom sets the standard in the Indo-Pacific, especially after “Taiwan walked a dark path on the road to religious freedom”. For example, she recalled, “the government of the time banned preaching in native languages other than Mandarin Chinese. Abuses of power led to the deportation and arrest of religious believers.”

She also praises the endurance of the Presbyterian Church in Taiwan that they may know religious freedom better than anyone else. “They too suffered coercion at the hands of the authoritarian government.The freedom we enjoy today is built on the blood, sweat, and tears of our predecessors. So we in Taiwan know better than anyone how precious freedom is.”

Giving her deepest thank to His Holiness the Dalai Lama and US Religious Ambassador at large Dr Samuel Brownback, though both of them are unable to attend the forum personally, President Tsai welcome all the religious and civil leaders to attend TIRFF.

Being certain that “accommodating diverse religious beliefs is essential for a democratic society” and “religion teaches us that loving kindness counters anger”, President Tsai believe Taiwan can do more to help our brothers and sisters around the world, regardless of their nationality or religious beliefs. 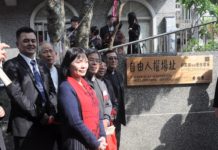