A Light in Darkness as Causeway Bookstore Re-opened in Taiwan

On April 25, the globally renown Hong Kong’s Causeway Bay Bookstore, whose owner and staffs was illegally abducted, interrogated and persecuted by China’s secret police for months from the end October in 2015 to mid-June in 2016, is officially re-opened in Taipei, Taiwan.

President Tsai Ing-wen specially sent her congratulatory boutiques written with verse from the scripture, “Let justice roll down like waters, and righteousness like an ever-flowing stream”, quoted from Amos 5:24.

Mr Lam Wing Kee, the founder and boss of Causeway Bay Bookstore, explained to young students visiting his bookstore that the mission of “Free Hong Kong, Revolution Now” is a long-term battle and the re-opening of the bookstore in Taiwan enable him to keep fighting the Chinese Communist regime controlling Hong Kong.

Rev Lin Wei-lien, secretary of PCT Church and Society Committee, stressed that Taiwan as a democratic polity would not only accept different stripes of stances within our society but also respect the speech freedom of views even radically opposite against each other. In other words, “I could accept some people claiming they are Chinese, but my identity as a Taiwanese is a 100% fact and cannot be denied!”, Rev Lin says. 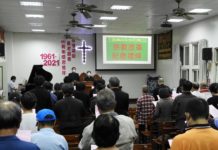 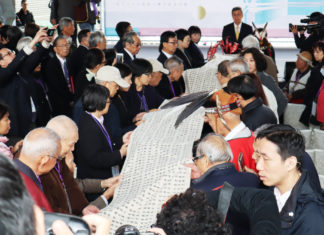 1,505 Political Prisoners Exonerated On The Eve Of Human Rights Day