Noteworthy is that Mrs Debbie Bush was born in Taiwan and her father, Rev Dr James E. Sutherland, had once served temporarily as acting Principal of Taiwan Theological College and Seminary from 1966 to 1967, and as Assistant General Secretary of PCT from 1968 to 1975 to support Rev Chong Mao-cheng and Rev Kao Chun-ming.

Attending the thanks-giving service for the publication of the aboriginal Dekay Bible is one of the major stops of Rev Peter Bush and Rev McLean’s journey in Taiwan. Having heard the remarks of “Seeing the publication of the first ever Drekay Bible published, our Drekay elders said in tears that they were content to leave this world without any regrets!”, delivered to the audience by Rev Deresay Tavelengane – Moderator of Drekay Presbytery, Rev McLean said in emotion that it was impressively unforgettable. 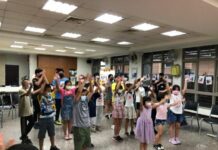